Branson has been known for tourism and entertainment for more than a century, and Historic Downtown Branson is where that tradition began. The district continues to be home to exciting live music shows, and the free Sparky trolley system is a great way to get to and from your show, and also take advantage of all of the shopping, dining and excitement downtown has to offer.

Downtown is home to two live-performance theatres and frequent special events that include live music.

The Historic Owen Theatre/Branson’s House of Comedy on Commercial Street is home to several Branson shows, including A Neil Diamond Tribute, Carpenters Once More and Cover of the Rolling Stone. Shows are scheduled for 10:30 a.m., 1 p.m., 3:30 p.m. and 7 p.m.

Less than a block away, also on Commercial Street, is the Hot Hits Theatre, which is home to several more Branson shows. On the schedule are the Motown Downtown Show, The Phil Thomas Show, Doo Wop Show and the Country Sunshine Show. Showtimes are 2 p.m., 5 p.m. and 7 p.m.

Both theatres are easily accessed by using trolley Stop #12 or Stop #5/13. 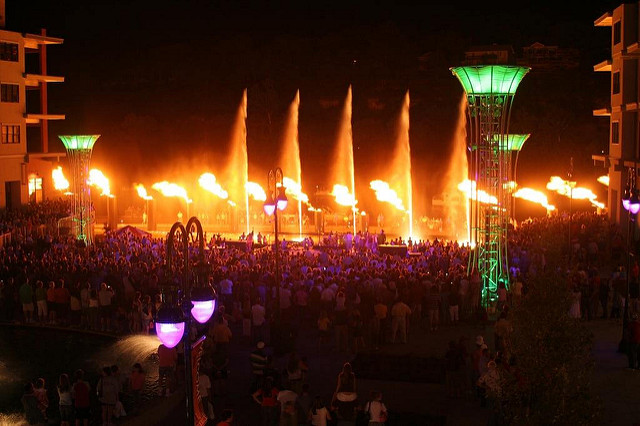 Downtown Branson also hosts many special events and concerts throughout the year, including the Branson Landing Summer Concert Series. The Landing’s Town Square hosts a number of free concerts, typically at 7 p.m. on Saturday nights. For the complete schedule of Branson Landing events, visit BransonLanding.com

Branson Landing is easily accessed by trolley stops #2 and #6 and is about two blocks from stop #3.

There also are a number of opportunities to experience live music downtown, including the Autumn Daze Arts, Crafts & Music Festival in Historic Downtown Branson. For more information about festivals, visit ExploreBranson.com/downtown

A Note About Evening Shows

While the downtown trolley ends its daily service at 6 p.m., there is typically ample parking downtown after 5 p.m. If you are planning to attend an evening show at a downtown theatre, chances are you will be able to park on the streets near the theatre or in a nearby parking lot.

Not only is Historic Downtown Branson where the city itself began, but it was also where Branson’s tourism and music theatre industries began.

Branson can trace its tourism roots back to the success of Harold Bell Wright’s Shepherd of the Hills novel in the early 1900s. Much of Wright’s book was written while he was staying at the Branson Hotel in downtown. Today, visitors can stay in Wright’s room and can view several of the author’s artifacts and memorabilia.

A few years later came Jim Owen, who was another early pioneer of Branson’s tourism industry, organizing float trips on the White River starting in the 1930s. Owen was a master publicist garnering attention in national publications like the Saturday Evening Post, Field and Stream and Life. Known as the “King of the River,” he frequently brought many celebrities and Hollywood A-listers to the area as his guests, including Joe DiMaggio, Charleton Heston, Elsie Bates and Gene Autry.

Owen also knew how to entertain his guests, building the T.K Owen Theatre in downtown in 1936 to show movies and put on live shows. One of those shows, the “Hillbilly Theatre,” struck a chord with Hollywood producer Paul Henning, who went on to create “The Beverly Hillbillies” based on the concept.

The theater has been restored and continues to operate today as the Historic Owen Theatre and Branson’s House of Comedy.

Today you know them as Branson’s Famous Baldknobbers, but in 1959 they started a revolution. Four brothers in the Mabe family started performing country music in downtown Branson in the basement of the old city hall. That building is long gone, which sat on the site of the current Liberty Plaza.