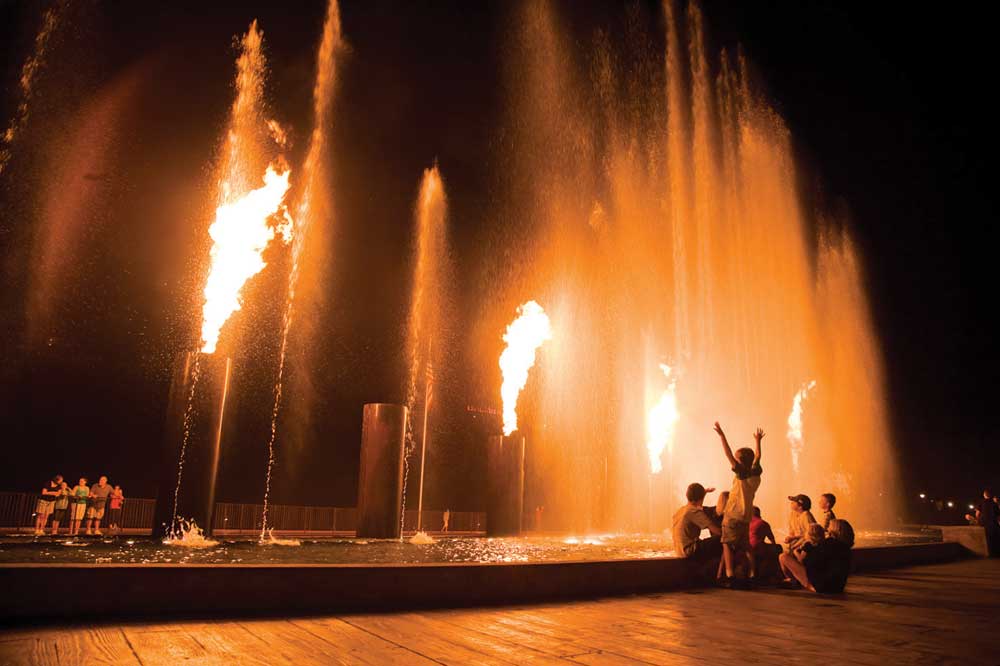 The largest (and we think best) free attraction in Downtown Branson is the Sparky trolley system. But there’s also many other free things to do in the area that Sparky can take you to. Here’s a list of some popular things to do in Branson’s downtown:

The Branson Landing Fountains are one of the top free attractions in the city and a major draw for downtown. Located in the “Town Square” section at the center of Branson Landing and with the picturesque Lake Taneycomo as its backdrop, the $7.5 million fountains shoot water and fire up to 120 feet in the air. Oh, and it’s all choreographed to music by Wet Design, the same company that designed fountains at the Bellagio in Las Vegas and the Downtown Disney marketplace in Orlando.

The performance is every hour starting at noon and continuing until the stores close (the first show is always the Star Spangled Banner, so be sure to pause and put your hand over your heart!). Each hour features a different fire and water show synced to music and the specific shows change seasonally.

This historical museum opened on April 1, 2012, the 100th anniversary of Branson’s incorporation as a city. It was originally at the corner of Business Highway 65 (Veterans Boulevard) and Main Street, but in 2016, the museum moved to its permanent home in the former Reish Shoe building at 120 S. Commercial. The new location is even more convenient to trolley stop #12.

Curated by the White River Valley Historical Society, the museum tells the unique and colorful history of the Branson area and how this small mountain town became one of the top tourism destinations in America. You can see pioneer-era artifacts, autographs of famous musicians and many priceless photographs and newspapers. Admission is free.

Another popular free attraction downtown is the Boardwalk, a 1.5 mile paved walkway along the Lake Taneycomo waterfront. It’s one of the best places in town to walk a pet, take a jog or ride a bike. Because Lake Taneycomo is a cold-water lake, the temperature is always little cooler along the boardwalk, which is a popular with walkers and joggers during the warm summer months!

On the north end of the Boardwalk is North Beach Park, a picturesque city park with old-growth trees, benches, picnic tables, fishing docks and lots of room for throwing Frisbees, playing horseshoes or having a picnic. It’s a favorite spot for walking pets, fishing or going for a scenic walk. It also offers some of the best shore-side scenery on Lake Taneycomo, so be sure to bring a camera!

Branson has a privately supported library, located on Pacific Street near Trolley Stop #11. While you will need to become a member to check out books or movies, it’s free to browse the collections or take kids to the spend time in the new Children’s wing.